As part of the annual Myseum of Toronto’s Intersections Festival, the Clara Thomas Archives and Special Collections (CTASC) of York University Libraries and its community partners invite you to a film night, an interactive exhibition, and a walking tour to explore the city’s cultural and historical diversity.

Motion Pictures: Immigration Films from the Vaults of Toronto’s Archives 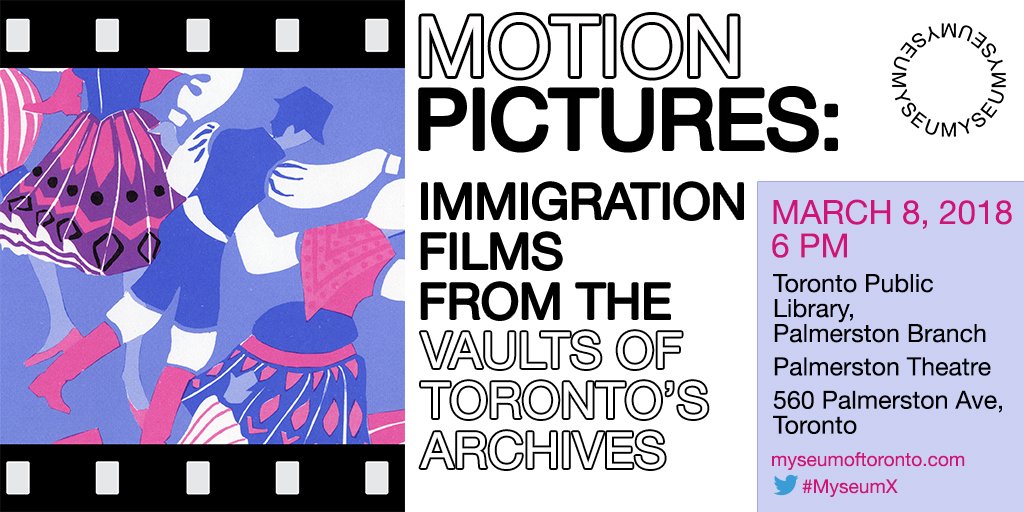 On Thursday, March 8, from 6pm to 7:30pm at the Palmerston Toronto Public Library Theatre, Motion Pictures: Immigration Films from the Vaults of Toronto’s Archives will demonstrate the role of moving images within the creation and dissemination of stories of immigration, and the integral role of Toronto-area archives in the preservation of such films.

CTASC and the Archives of Ontario will screen archival film footage that explores how the medium of film contributes towards – and sometimes questions – narratives of immigration and multiculturalism, and the importance of archives as repositories for key records of the immigrant past.

At the event, the Regent Park Film Festival (RPFF) will present their innovative project Home Made Visible which aims to address an important gap in the preservation and celebration of the home movie footage of Indigenous and Visible Minority Canadians. CTASC is the RPFF’s archival partner in this project.

The Journeys of the Copts and their Artifacts

From March 12 to 24, St Mark’s Coptic Museum and the Coptic Canadian History Project (CCHP) will present the Journeys of the Copts and their Artifacts, showcasing the culture, immigration, and achievements of Egypt’s Coptic Christian diaspora in Toronto and Canada through three initiatives in public programming.

A multimedia talk on March 12, 22 (6:30pm) and 24 (3pm) will explore the topic of “St. Mark’s Parish: Copts’ Journey Through Toronto’s Places of Worship, 1962-1978.” Secondly, a new exhibition will share the museum’s history and milestones alongside the stories, challenges, and achievements of 33 Coptic professionals. While displaying the museum’s first artefacts and memorabilia, the museum will also launch a historic series of contemporary narrative icons by iconographer Victor Asaad Fakhoury, which masterfully chronicle events that have affected the Coptic Church and Copts in Egypt since the so-called “Arab Spring” in 2011.

RSVP to take the free shuttle bus to the event.

Gateway to Greektown: A Historical Walking Tour of the Danforth On March 24 and 25 at 10:30am and 2:30pm, Gateway to Greektown: A Historical Walking Tour of the Danforth will be led by the Greek Canadian History Project (GCHP) to illuminate Greek immigrant life and the history of Greektown in previously unexplored ways. The event will take participants to important historical sites that currently escape our collective memory.

Accompanied by materials from CTASC, the tour will highlight political, gender, spiritual, and cultural elements of Greek life on the Danforth from the 1960s to the 1990s, when Danforth was a space where newly-arrived, predominantly semi-rural Greek immigrants intersected with and shaped Toronto’s urban setting.

Tours taking place on March 25 will occur before and after the Greek Independence Day parade, which is an annual commemorative event in Toronto’s Greektown.

RSVP to attend the walking tour.

More information on our partners, please visit the website of the:

This entry was posted in News. Bookmark the permalink.